The premise behind this book is that lots of women are designing impressive buildings you recognize, buildings that are worth celebrating, but you may not be aware of this because their work is often shown under a firm name or misattributed to men. To correct this gap in your knowledge, this book collects excellent projects, both recent and historical, and tells you about the architects behind them.

The selection of projects neatly tilts toward my favorite types: large public works, plus large private projects, both of the type that are experienced by a lot of people: concert halls, offices, museums, schools. Each architect is represented by a brief biography and one or more excellent project photos with key details for further research. Collaborations between men and women are recognized and celebrated in an acknowledgement of the team effort that contemporary architecture ordinarily requires for large scale projects.

Hall is very modest about her research and the limitations of the Europe-centric architectural awards processes that favor Europe and selected other regions, but I am delighted by the geographic range of her selections.

The essay and quotes in the book underline the importance of spotlighting these high quality projects to correct for the erasure of women in the field. Hall calls out the 2014 scandal around having architect Patty Hopkins photoshopped out of a photo of architecture award winners, while her husband was left in for a BBC show about their shared firm’s work – even though she co-founded the firm, and their shared name is on it! (See the article in Architects’ Journal entitled, “BBC slammed for ‘bias’ after Patty Hopkins is sidelined in TV show” dated March 5, 2014 by Richard Waite and Laura Mark.) It isn’t just about the photo, it’s about the program’s premise that men were exclusively responsible for the shape of contemporary design – the photo was just a reminder that the facts did not support that narrative. If your are actively edited out of discussions about the firm you co-founded and the projects you worked on, just to indulge some stranger’s all-male hero narrative, who is safe? The lone genius theory is bad enough, but diminishing key founders because of their gender is outrageous.

“No matter how my work was published or credited, it was seen as Venturi’s. The notion that we might both design seemed inconceivable.”

(This issue is, unfortunately, relatable: a male teacher happily gave my boyfriend/classmate credit for my architecture work because just once I used my bf’s woodworking tools to build a model, though if he had borrowed equipment from me, the reverse would NOT have been suggested. My bf told me he took it as a compliment (to him). Their creepy camaraderie over rewarding him for my work made quite an impression on me.)

This is a beautiful, oversized book of great projects with lovely photos. The core details about the firms behind the designs are enough to send you in the right direction to learn more. The presence and success of the women behind these projects is encouraging and satisfying.

This book also gives you an excuse to visit the Phaidon website, which is GORGEOUS and has many wonderful temptations, especially the fine art monographs and design books.

There is some extremist judge being considered for the U.S. Supreme Court (again), and she’s in a spin-off religious sect that once bestowed the title of handmaid upon her. (AP)

This evoked the famous Margaret Atwood novel, The Handmaid’s Tale (en.wikipedia.org), and so there were some awkward news flurries about how HER faith group was NOT the inspiration for THAT story.

There was even a grumpy denial from the U.S. Senate Majority “Leader” (guardian.co.uk) in which he said, among other things, that the term was being used pejoratively, “because one liberal author put it in the title of an anti-religious novel in the 1980s…”

I’m in a religion, and I did not think the Handmaid’s Tale was anti-religious in any way… because I don’t naturally associate the oppression of women, including treating women as property, forcing women to conceive children with men not of their choosing, or restricting other basic human rights with religious values. You’d have to be part of a religion with a similarly oppressive belief system to see that horrifically dystopian novel as an insult to your— oh. OH. 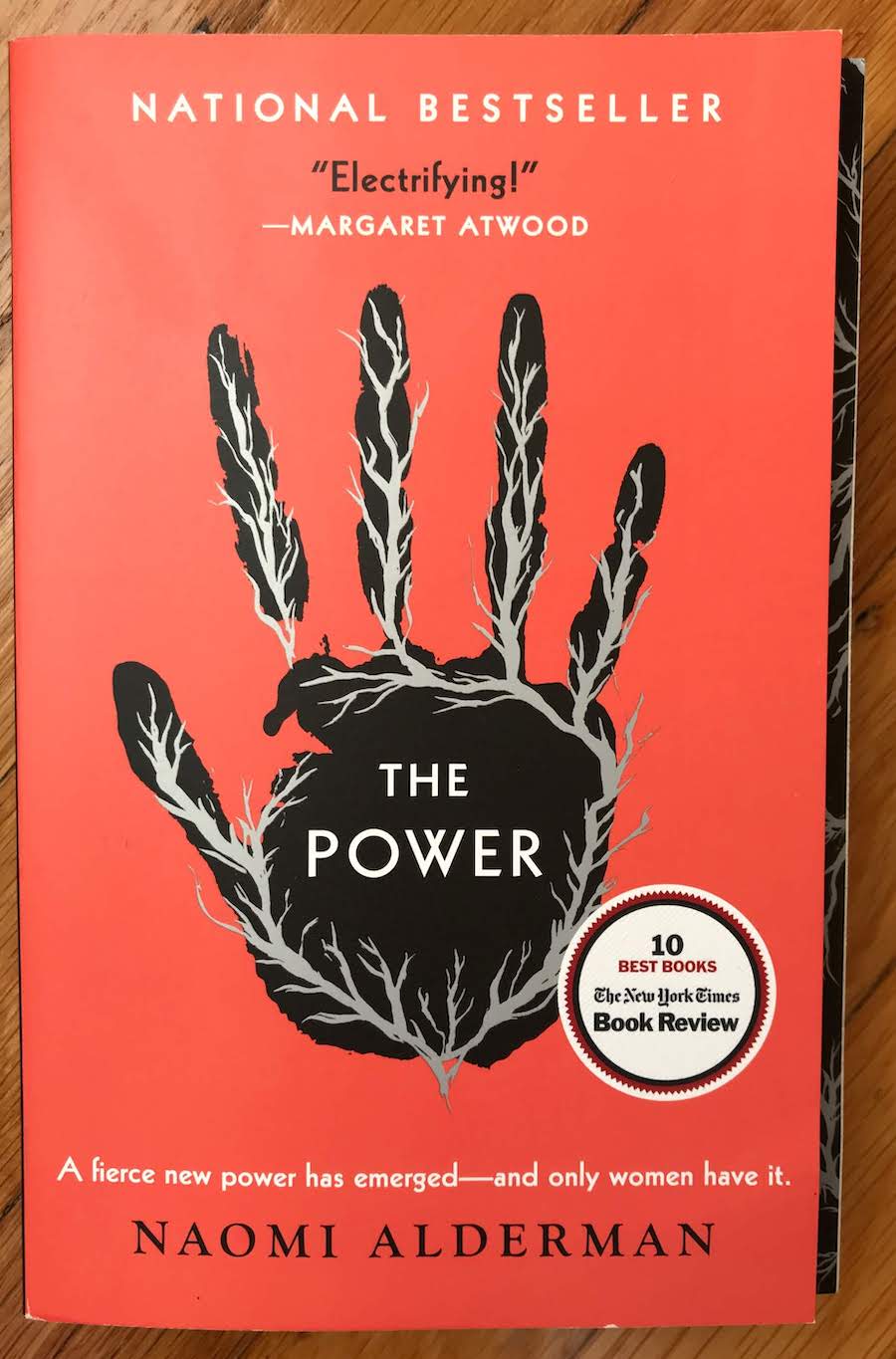 The Power
by Naomi Alderman
published by Back Bay Books (Little, Brown and Company)
2016

What would happen to the structure of society if women had the physical power to defend themselves, or even routinely overpower men?

In this engrossing novel, women develop the ability to generate electricity. Humans already have a lot of electrical wiring internally, but in the book, a scientific intervention intended for one purpose may have inadvertently given rise to the ability for women to generate and control electricity, an have the ability to taze at will from puberty onward.

This changes the world.

The story follows several women, both privileged and disadvantaged, comfortable and abused, in the spotlight and sidelined, who find different ways of utilizing this development to influence the direction their societies evolve in. The story of an intrepid male reporter from Lagos also provides a sympathetic (and at times, alarmed) point of view.

Alderman does a remarkable job of showing the RANGE of impacts that could arise, from fiercely patriarchal societies harming or killing women to maintain control, to government leaders militarizing this new ability; from women who use moderation in utilizing their new powers in societies that have included them, to women who wreak vengeance upon their captors and oppressors in societies were they functionally enslaved.

The way the book ends… just be sure to read what looks like an appendix, but is a key part of the story.

Yes, I’m sure Margaret Atwood is DELIGHTED that she got to make such a concise review-and-play-on-words about this book ON THE FRONT COVER.

As someone who has daydreamed of subtly engineering women to be stronger to decrease abuses, do I think that power struggles could play out as they do in this book? Yes, and perhaps Alderman is more realistic than I am, considering history. When have the powerful ever shared power willingly and peacefully? When have enslaved people ever received justice? When have oppressors ever willingly made amends? My own dark futures in fiction are dark DIFFERENTLY, but yes, I think we agree on the backlash. Because: humans.

Summary: a page-turner of a book with a thoughtful story arc for the characters, thoughtful (and very dramatic) implications across the wide range of conditions, and a dark view which is entirely fair, considering the state of the world. I’m glad I read it. 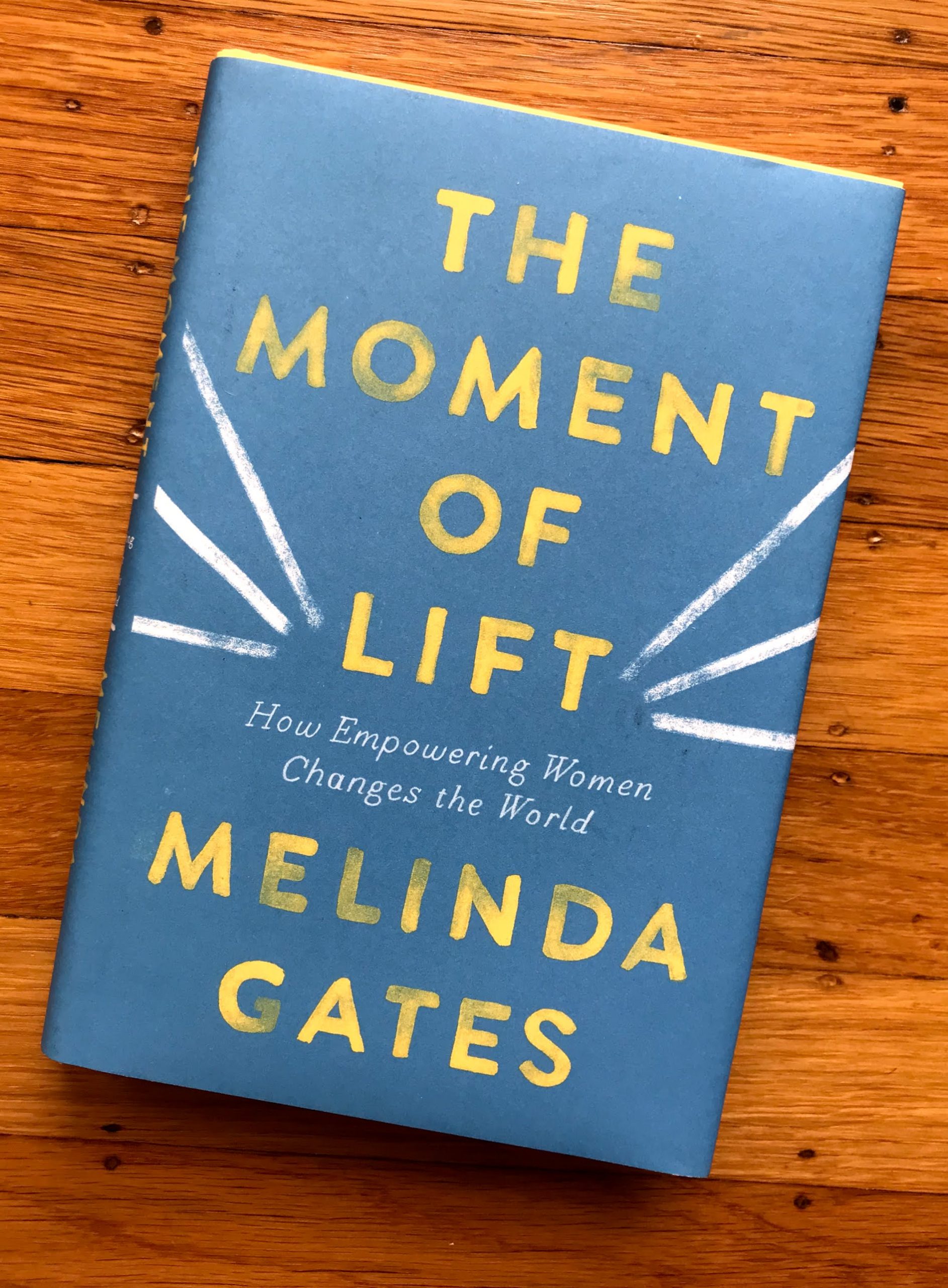