I did not enjoy the month of January.

I’m not saying I didn’t have some good days, but the world and my country had some UNUSUALLY BAD DAYS, and so the math is unfavorable.

Beginning of the month: right-wing threats seemed to flood social media sites, egged on by the now-former president. I’d already been stressed by his ‘even if I lose I will stay’ rhetoric dating back to last summer, and no one seemed to be taking it very seriously. The lack of attention to on-line rhetoric was alarming.

January 6th: my midday meeting was interrupted when the partner of the person I was meeting with walked in to say that the US Capitol building was being attacked, and perhaps he could give that some attention? That was the beginning of many hours of horror.

January 8th: while the people who violently attacked the Capitol had been allowed to wander away freely, which was exasperating on every possible level, the US hit a daily death rate of FOUR THOUSAND PER DAY.

January 19: The US hit an official death toll of four hundred thousand.

That was ALL TOO MUCH. Plus, local COVID cases spiked again; another dear friend remained sick with COVID-19 for the entire month of January in a city with no hospital capacity; plus the US went on high alert once the authorities decided to actually read the threats against the government that people had been making online, and nearly every state had some threat made against their capitols and other government offices.

Yes, the Inauguration on January 20th went VERY WELL – it was great – and a relief! – to watch, and nearly impossible to concentrate on anything else. Yes, the new government appears to be off to a coherent, sane start.

Yes, my friend is still on the mend, and hasn’t had to be hospitalized, despite some worrying symptoms.

Yes, I made a ton of art on the weekends, which allowed me to turn my attention entirely into paint, color, and forms, and away from the madness and sickness that dominates the news.

But… I wouldn’t want to experience January 2021 again.

I reviewed and/or had enough information to recycle my 340+ pages of official voter guides! (I have now also recycled all of the election propaganda that came in the mail!)

I sent letters to 30 infrequent voters, encouraging them to vote through the auspices of Vote Forward!

Vote Forward volunteers send heartfelt handwritten letters to unregistered and low-propensity voters encouraging them to participate in our democracy. The letters have been shown to significantly boost voter turnout.

I previously made small donations this year to 15 different candidates running for office (all of whom happen to be pro-choice women!), and bigger donations to excellent organizations like Fair Fight, the Planned Parenthood Action Fund, EMILY’s List, and ActBlue’s get out the vote drive. I give monthly to the ACLU, who have been fighting in court for voting rights on multiple fronts and for many groups.

Fair Fight is a national voting rights organization rooted in Georgia. Join our fight for free and fair elections today!

EMILY’s List, the nation’s largest resource for women in politics, has raised over $600 million to elect pro-choice Democratic women candidates. With a grassroots community of over five million members, EMILY’s List helps Democratic women win competitive campaigns – across the country and up and down the ballot – by recruiting and training candidates, supporting strong campaigns, researching the issues that impact women and families, and turning out women voters to the polls.

Fighting Racism. Reimagining Policing. When the Constitution was written, “We the People” did not mean all of us. Slavery created a legacy of oppression for Black people that is woven into our institutions today – from education and health care to the criminal legal system.

I’m acting like U.S. democracy depends upon this election, because… it does. 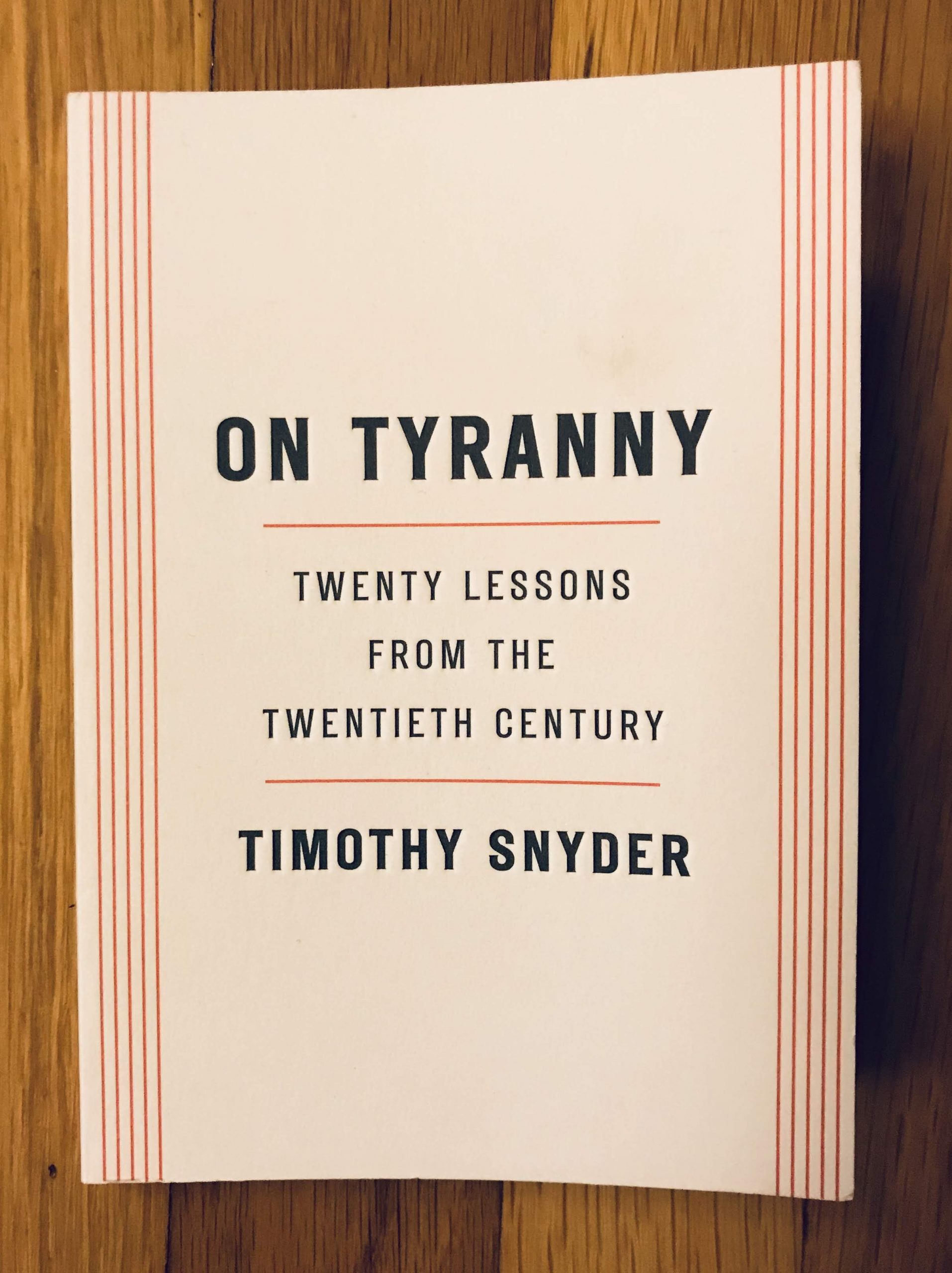 This pocket-sized book of about 125 pages is written by a Yale History professor specializing in the Holocaust. Snyder relies upon this historical expertise to compare the language, speech, rallies, actions, and slogans of the US president elected in 2016 to those used by Nazis, Communists, and Fascists in a prior century. He finds many commonalities, and summarizes appropriate responses into twenty themes intended to support civil society over repressive authorities.

I read this when it was quite new, and found its warnings insightful; I read it again recently, and found it to be understated relative to our current circumstances.

What struck me more on the second reading is the idea that we are formally taught to believe that “progress” is inevitable; that the future is bright; that the seeds of the future were planted long ago, and all we need to do is step back and let it naturally grow. I recall being in high school and believing this, despite known systemic flaws in that plan. The idea is appealing, because it requires no real effort on any one individual’s part. If the future takes care of itself – how convenient is that? But I grew up, and could see clearly that having a future I’d actually want to live in requires effort.

Progress is NOT inevitable. Democratic institutions DO NOT defend themselves. People DO commit terrible crimes in the names of ideologies they can barely explain. Civilizations DO collapse.