036 : books : memoir : Hunger Makes Me a Modern Girl, A Memoir, by Carrie Brownstein 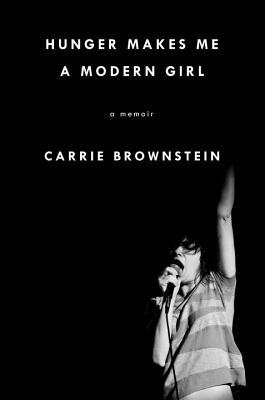 Hunger Makes Me a Modern Girl, A Memoir by Carrie Brownstein (penguinrandomhouse.ca) is a thoughtful memoir from a musician, screenwriter, actress, and all-around talented young(er than me) woman, familiar to me primarily from her role in the fabulous band, Sleater-Kinney (sleater-kinney.com).

I would ordinarily be skeptical that a musician who finds expression in music would write an interesting memoir, but Brownstein has a broad range of talents - her work on Portlandia is brilliant and hilarious - and so I didn't hesitate when this turned up on the table of books the folks who run Needles and Pens (needles-pens.com) recommend. (I am also reconciling with the fact that people younger than me are writing engaging memoirs, which has more to do with the complexity of living life fully while deferring the goals I thought would define the outlines of my life... I'll remark on that some other time.)

This book discusses her childhood, the dynamics of her family, her fandom and struggle with direction (which I think could be both encouraging and discouraging to her young fans - it wasn't an easy time!), her move to Olympia to be involved in the most vibrant elements of Riot grrrl, how Sleater-Kinney came about, her relationship with Corin, her health troubles, the breakup of the band, and how she has been spending her time afterward.

The main area of interest for me is how she came to be in Sleater-Kinney AND choose other pursuits afterward. The book gives me what I want: descriptions of her struggles as an aspiring musician, unsure of herself and of the commitment of the musicians she has fallen in with, the years of hard work and uncertainty that a creative life entails, and the joy of finding great collaborators for new projects.

This is an ideal book to use to better understand the complications of fandom (most musicians are fans first!), of wanting to be in bands that won't have you, of struggling to have the right line up for your own band, and of the difficulties of the touring life for an indie band during the Riot grrrl movement in the Pacific Northwest.

This is especially interesting for those of us who enjoyed multiple bands from that movement. When Brownstein describes trying out to join Seven Year Bitch, one of my other favorite bands of that era, I had to immediately sent messages to my friends who had been at those live shows with me, so they could visualize the alternative history that Brownstein's membership would have created. (SYB meant a lot to me, and the shows! Those live shows! They were amazing, and I remember them fondly.)

While all bands struggle at some point in their careers, the myth of instant fame in our culture obscures the hard work that goes into even the most successful and lasting musical careers. The fact that the hard work does not end once "being discovered" or having Andy Warhol's '15 minutes of fame' is abundantly clear from the wearying tours, the long sessions to develop songs for new albums, and the endless work that Brownstein describes. So much effort was invested in those passionate performances I have enjoyed so often over the years! The book tells of the toll that effort took on her.

Brownstein is "candid" (as the reviews I read after the fact suggest), but also reserved. I hadn't actually known that she had dated Corin Tucker (Sleater-Kinney's primary singer). She describes the complexity around that relationship, and the difficulties caused when Rolling Stone's interviewer, without permission, referenced their private relationship - this national music magazine was the vehicle that each of their parents learned that they were more than friends. (!) Brownstein's description of the relationship and its end are quite matter-of-fact, and her reserve surprised me a bit. I have dated musicians, I have had disastrous experiences with exes, and so I wanted to know how she managed it, but these things are not addressed at the level I expected. (She DOES still have a working relationship with Tucker...) As a writer, it interested me to observe the many things Brownstein DID NOT say about her relationships, her disappointments, and her opinions. Brownstein shares a great deal, yes, but also remains a private person, which is a challenge in any biographical writing. I am not nosy - I am also a writer, and also quite private - and I am pleased at the balance Brownstein struck between sharing her experiences, both the joyful and the difficult ones, and yet keeping the interested strangers reading the book at a certain distance. She knows that you can understand her story without knowing every inner feeling she had, and maintains that balance of discretion skillfully.

This memoir describes one of many diverse sets of approaches to successfully navigate a creative life. I found this an engaging and worthwhile read.

images and text Copyright © 2016 A. E. Graves, book cover images are the copyright of their respective owners