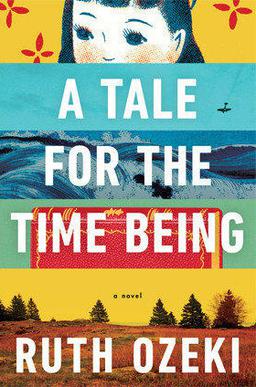 A Tale for the Time Being by Ruth Ozeki (penguin.com) is a series of stories-within-a-story which pulls readers back and forth in time.

In the misty Pacific Northwestern US, a beach-combing author named Ruth finds a diary and personal effects which may have washed over with debris from the 2011 tsunami in Japan. The diary's author, Nao, was a teenager in Japan whose life with her suicidal father and bullying classmates seemed likely to end badly. A rare ray of hope in her journal was provided by her elderly grandmother, who was living as a Buddhist nun in the region of northern Japan where the tsunami struck the hardest...

The novel engages you in Ruth's American life, in Nao's Japanese urban teenage life, in the long and active life of Nao's grandmother, and in the lives of others in Nao's family, who bear a heavy history which Ruth may have some connection to.

Ozeki's descriptions of the Pacific Northwest (which I have visited frequently) and Japan (which I have visited infrequently) are evocative. Her description of Nao's difficult school life and the classmates who post their abuse to the Internet to increase the shame of their victims is vivid, realistic, and deeply disturbing. (The bullying is so cruel, and so sharply designed to cause unbearable harm... the descriptions really stick with me.) Ruth's life, and her ways of handling her relationship and her own life difficulties, is easily relatable. Nao's words, including her descriptions of her text exchanges with her elderly grandmother, range from entertaining to worrying to Zen. The grandmother becomes a fascinating character in her own right, through Nao's experiences with her, which allow Nao to absorb elements of Zen into her otherwise too-worldly life. The mystery of what happened, or will happen, to Nao is the lure that keeps pulling Ruth into the past shown in the diary, which won't reveal its ending.

That same mystery makes this book an engaging, intense, contemporary novel to read.

images and text Copyright © 2014 A. E. Graves, book cover images are the copyright of their respective owners