Another episode of staring at the earth from satellites: Dry, white hills near San Lucas, CA - Google Maps.

This is a landscape I viewed many times by car on return trips from two semesters at a university in San Luis Obisbo. The white, chalky, dry soil also seemed so improbable in our lush state.

Once upon a time, with a view of Everest

It has always been a pleasure to love maps, but satellite images with maps delicately, digitally laid over them may be even better.

When I was young, so long ago, I went on a trek in Nepal. At one point, we were in Tengboche, a flat spot where there was a monastery, some outbuildings, and many festivals, though none timed to coincide with our too-early arrival. My trekking group stayed there for a few days. We had stunning views of Mt. Everest and Ama Dablam. It was extraordinarily cold at night: another story I tell, about my the water in my water bottle freezing solid in the tent, despite being between me and my roommate, occurred in Tengboche.

It occurred to me while telling another story about things I did in Tengboche that the name had no meaning to anyone who had not been there, or who had not planned a trip to Everest. So I mapped it.

Go to Tengboche, Nepal - Google Maps and make your browser window as large as you can. Collapse the sidebar. Zoom in, just a bit, or out just a bit, to see the Everest Himalayas (Everest is just up and to the right of Tengboche).

What a lovely planet we live on.

Labels: beyond the norm, outdoors, world

The massive 8.8 earthquake that struck Chile may have changed the entire Earth's rotation and shortened the length of days on our planet, a NASA scientist said Monday.

The quake, the seventh strongest earthquake in recorded history, hit Chile Saturday and should have shortened the length of an Earth day by 1.26 microseconds, according to research scientist Richard Gross at NASA's Jet Propulsion Laboratory in Pasadena, Calif.

I know that my iPhone photoblog at mobilelene.blogspot.com has been inadequate to feed the relentless demand for my vacation photos, even though I posted about 150 of them over the course of late November and early December. Also, to see the images in groups rather than in arbitrary sets of six, you have to view the November and December archives to see large groups of images at once. And that doesn't work for a lot of people.

I have been posting sets of images from my "real" digital camera in Facebook, which kindly permits non-Facebook users to view the albums without any silly login or personal information disclosure requirements, in a very user-friendly format.

So far, I have posted the following at Facebook:

-Kyoto Bikes, a photo essay on bike infrastructure and bicyclists

-Japan - And Then It Rained Some More, various Kyoto scenes, emphasizing roof details and fall color

and, as of this evening,

-Japan - Kyoto between rainstorms, which also emphasizes roof details and fall color, but at different locations than the earlier sets.

I will likely post one more album of Kyoto images to Facebook (though I'm not sure what to do with all the plant studies I took in the Kyoto botanical garden, most of which involve plants which are not native to Japan), and perhaps an 'iPhone greatest hits' collection of favorite photos from my photoblog there.

I also have reports going about what I ate on the trip, highlights, cultural observations, and other details, which will reside on a page here at teahousehome.com, where I will also consolidate the links. Though I hope you're not holding your breath: it could take a while to get them all set up to my satisfaction. Stay tuned.

I have returned from Japan 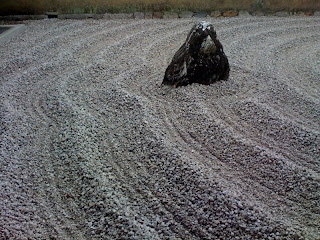 ...and am still feeling the effects of the 17 hour time difference. Well, that and the three drinks I had this evening with my co-workers. Ahem.

I have a just few more phone photos to post. (I learned a lot about the sort of high volume activities that distress Blogger, which was useful, though periodically frustrating.)

It was a remarkable trip.

I kept extensive notes (especially about food), and took a vast number of "real" digital camera photos which I haven't even downloaded from the memory cards yet. I haven't even unpacked anything but my dirty laundry, so I could wash it before it got any ideas about functioning independently. I'll post an illustrated travelogue when I actually believe that I am in this time zone, which should happen in a week or so.

I have also posted Kyoto Bikes, a Facebook photo album of the bicycle infrastructure and activities I observed during the trip.

At "night" in this time zone, I dream that I am still in Japan, and see neon signs written in Hiragana...

Meat consumption contributes to climate change. But you probably knew that.

Yes, aside from the dramatically increased heart disease and cancer risks, all the other adverse health issues, the water quality issues, and the scary energy policy issues associated with meat-eating, there is a big, meta-impact to the planet. Science/Nature | Shun meat, says UN climate chief (news.bbc.co.uk, 9/7/08):

'The UN Food and Agriculture Organization (FAO) has estimated that direct emissions from meat production account for about 18% of the world's total greenhouse gas emissions.'...

The UN considers the entire cycle associated with meat production and consumption, including clearing land to raise animals, producing grain to feed them, shipping them, and so on.

None of this should be news to you: you've surely read about the massive water consumption required to produce a pound of meat for human use, and even books about food written by omnivores talk about the massive energy inputs in oil required by agribusiness. But you may not have put all of that together into a big-picture view. Do that here now.

(Any of you out there who don't 'get' climate change may simply interpret the details of the article to translate to "pollution," which you may understand through more direct experience as something that is bad for you. (That is the fun part of most arguments against the existence of climate change: those arguments tend to favor increases in pollution for purely economic reasons, unhinged from all known science about the effects of pollution on us and our economies.))

My 1992 Japan Travelogue is now on the web. Seriously.

Photograph of two of my pen friend's "associates," pen friend Terue, me, and a few idle strangers, Kyoto, 1992. I cannot believe that my hair was ever that long, or that I wore little wire-rimmed glasses that were that round. Golly. I was, what, 24? I wouldn't believe it if I didn't get it out of my own camera.

I don't know if I have yet mentioned here that Steven has won a scholarship for independent study in his field. Since he works as a gardener in a famous Japanese-style garden, he intends to use the funds to travel to Japan for a few weeks to study the gardens of Kyoto. I am, even now, saving up so that I may join him.

It's funny that he is interested in Japanese design now, because it was a very serious obsession of mine in the late 1980s and early 1990s, as the books of various sorts on language and design that I keep throwing at him suggest. My architecture instructors kept telling me that my designs appeared to be very "Japanese," and ultimately I decided to find out if they were right, first hand. Also, I'd had to drop out of school for lack of money, and figured that I could cater to my obsession while earning some money and learning Japanese, all at once. My 1992 travelogue/letter to my pals explains, at great length, that things didn't turn out as I had planned. It was still a great experience, but not the specific experience I had signed up for.