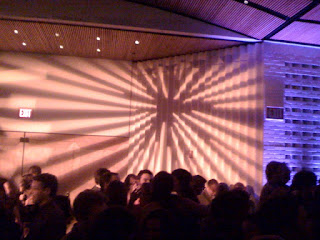 As the gentleman waiting in line beside me observed, how the heck is he supposed to feel elite in a line like this? I told him to think of it as a mass performance piece. That only consoled him somewhat.

The line moved quickly: I passed the loading dock dining area featuring Taco Truck, a Belgian waffle truck, and Chez Spencer's French take away truck by 8:50, and was in the door and submerged in the art-loving, party-going throngs by 9.

I have never seen that building quite so full of people. Every balcony on the stairwell, the bridge, the entrance to the stairs - all were packed. 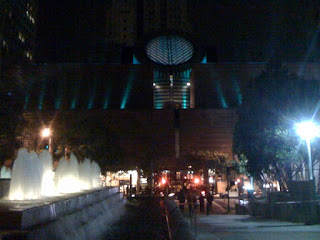 I had cleverly seen the 75th anniversary show (ending today!) and the first half of Focus on Artists (Richard Diebenkorn, Guston, Ellsworth Kelly, Brice Marden, Robert Ryman, Richard Serra, Frank Stella, and Clyfford Still) in advance, so I could focus my energy on not being trampled, observing proper mosh pit behavior, watching a live performance by the Magik Magik Orchestra (myspace.com), who filled the space usually occupied by Caffe Museo and played over an incredible din (and who played poppy tunes quite unlike what they have up on myspace, which, to the extent I could make out the parts, sounded fun (some of which reminded me structurally of songs by Marcy Playground, even though they weren't actually very similar)), chatting with three great people I hadn't seen in a while, watching part of the set by the Dodos (myspace.com)(less interesting than the orchestra), and acquiring champagne from stoic, overwhelmed bartenders using a drink ticket that another patron reached over and handed me upon hearing me tell my friends that I wanted a drink. (Yaaay, art patrons!)

It was a nice scene to visit, and I'm glad no one was trampled while I was there. I'm glad I went, because I wouldn't have believed that the museum has so many members, or that so many people could fit into the building. 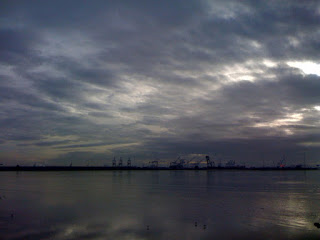 2009 is not a year I'm going to miss: years involving major transitions are often uncomfortable, like new jeans that just don't fit correctly, and won't until you've really had a chance to break them in. Or perhaps drop a few pounds, and then make a bad analogy about them.

The good things in 2009 were truly good: invaluable friendships, the joy and laughter with the people closest to me, successfully building my first large format camera, getting my work from the new camera into a juried New York City gallery show (and going to NYC for the opening!), having a local gallerist choose some of my work to hang in San Francisco in 2010, developing the optimism to date again (and actually going on dates), getting better at yoga, witnessing the cautious beginnings of actual recognition for my skill and hard work at my job...

The bad things were just incredibly bad. I'm doing my best to leave the roughest parts of 2009 behind, keeping the lessons, the scars that can't be healed with Vitamin E, and little else. I've got a new face cream that's doing wonders for the lines from looking so damned pensive all the time.

I have great plans and a full tank of optimism for 2010. I hope it's a great year for us all.

Best Wishes to You And Those You Hold Dear for 2009!

Talk like a pirate! I failed to note that September 19th was National Talk Like a Pirate Day (talklikeapirate.com). It is also the 8th anniversary of my first date with Steven. (Awwww. Or perhaps, Arrrrr!)

My friend M finds this overlap of events completely appropriate.

My favorite tool for the 19th is this Pirate Glossary (at io.com), which is funny in that "glossary" isn't a very pirate-y kind of word.