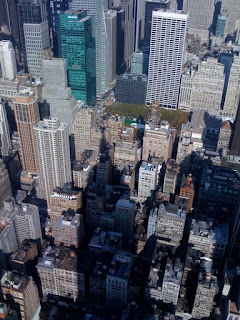 Last autumn, my still life work on metal plates, which I had made with my homemade large format camera, won a spot in a juried group show in New York City. It was my third juried group show in New York, and I was becoming frustrated that I'd been unable to SEE the shows my work was in. (My first juried NY show, out in Rochester, had been documented in a lovely, hand-bound catalog, but that is rare.)

I hadn't taken vacation all year, primarily due to being broke. But I had a small emergency fund with a few 8+ year old shares of Apple stock in it, shares that had just reached an all-time high.

So I bought a ticket, booked a hotel room for three nights with the help of my officemate, and went.

In my remote childhood, I had set foot in NYC many times. Those were the years of visiting grandparents at least once a year in either the heat of summer or the depths of winter. My father worked for an airline, and we had some flight benefits. I have recollections, quite vividly, of JFK International airport: of endless red carpeting, coin operated bathrooms, the vending machine where my mother would let me buy a packaged coffee cake, dirty snow - piles and piles of dirty snow - and the long ride in a Connecticut Limousine back when it was still a limo, lined with row after row of businessmen in suits, driving us at odd hours of night or morning to Connecticut.

This was my first trip to New York FOR New York. 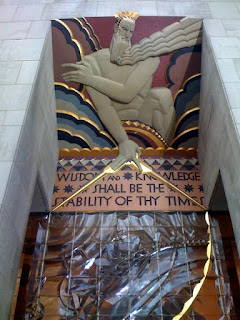 There were many highlights to the trip, both visual and social:

Sunday
-The approach to Manhattan from JFK, during which I realized how the Empire State Building really does look grand.
-Dinner with my officemate and his partner; drinks at improbably fashionable Buddakan (buddakannyc.com - launch the site and take the tour; the lighting is actually much lower in real life), which I'd like to visit again.

Monday
-Visiting THE Museum of Modern Art (moma.org) in its spectacular "new" building.
-Dinner at Safran (safran88.com), because nothing says home like 'black rice' with dinner, and I had gone too long without it. Aaaah.
-A pleasant, first in-person meeting someone I had only known on-line.

Tuesday
-Coming to the realization that my SF City walk translated PERFECTLY over to NY: I could walk down the street unmolested by hawkers of tour tickets and other sightseeing miscellany. They parted before me, only to set upon the nice Midwesterners behind me. I was also encouraged to vote in the local elections. I took this as a high compliment.
-A visit to the Empire State Building. I wanted to do at least ONE classic tourist thing, and I'd heard it was pleasantly 'deco.
-Lunch at HanGawi, an incredible Korean vegetarian restaurant near the Empire State. The meal was completely amazing.
-The Kandinsky retrospective at the Guggenheim (guggenheim.org), a building with bathrooms so tiny that my knees touched the opposite wall when I used the facilities. (You knew that Wright was short, didn't you? He was short. And indifferent to the needs of taller people.)
-A walk through Central Park.
-The opening night party for my group show at Soho Photo Gallery!! My officemate, plus a good friend who had come all the way up from Washington DC on a bus, plus her friends joined me. I gave a roving lecture on the different processes used to make the images. It was a blast!
-Dinner in the East Village with my DC friend's entourage at a little Italian bistro that made unsealed squash ravioli with the most incredibly tender pasta... 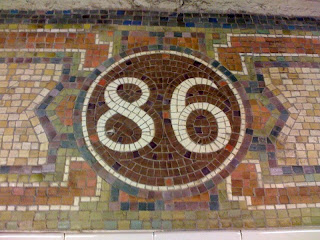 Wednesday
-An ultra-fresh bagel from a street corner cart. Mmmmm: poppy seeds.
-Lunch in the Park Slope neighborhood of Brooklyn, at a charming little restaurant with potent lattes and Victorian-era metal pressed ceiling tiles. I chatted with the owner and barista for a while before my date arrived. New Yorkers are friendly!
-A tour of Brooklyn, followed by hours of relaxed socializing over classical music (Mozart, mostly) and tea.

This was just a reconnaissance trip: my officemate and I have a long, running list of things to do when we are there again at the same time later this year. I could have easily spent a week just working through my list of museums, but my hotel budget means those items will wait until another visit.

Despite dark and cloudy weather for most of the trip, I have two albums up on FB: New York City in 600 x 800 pixels is my phone photo collection, and New York City - a few buildings covers the few times I brought out my Digilux to handle low-light situations.

Labels: autumn, beyond the norm, eating while traveling, Korean food

Is this (a) a Korean experimental jazz trio or (b) what happened in my kitchen this Saturday morning?

Kids: if you try out kim chee in a jar from a refrigerated display case, and if that kim chee comes with a warning, printing on the top of the jar, warning that it must only be opened over the sink because natural fermentation is creating internal pressure, you should probably keep it refrigerated and open the jar over the sink. Unlike, say, what I did.

It was delicious. And I wasn't wearing anything I was fond of.

My pal Helen had been holding out on us. At one point, when discussing getting together at each others homes for food, she mentioned to us that she happens to be skilled in a range of Korean specialty dishes. She mentioned this, but I thought she was just teasing - I rarely get to enjoy her fabulous company, and when would such a busy person have time to cook elaborate Korean dishes for us?

The answer: mid February, when she invited about 10 of us over to a traditional Korean feast, made only slightly less traditional by her extremely kind accommodation of three vegetarians in the group.

These are the delicious items she made for us:

-jap chae - stir fried glass (yam-based) noodles with vegetables such as onions, mushrooms, garlic, and greens in a delicious, savory sauce. This was really fabulous, and one of the best things was the perfect texture of the noodles: they held their shape and had good texture, which can be tricky with glass noodles. (If you undercook them, they are too chewy; if you overcook them, they fall apart.)

-kim bap - rice rolls with egg and veggies, wrapped in seaweed. These are a lot like the oversized sushi rolls you can get at some sushi places, sometimes called veggie futomaki.

-bin dae duk - these are delicious fried pancakes with minced scallions. They taste quite a bit like potato pancakes, but are actually made with bean flour, which gives them a hearty texture. They came with a delicious, salty dipping sauce with sliced scallions floating on top.

-mandoo - fried dumplings! These delicious dumplings were filled with egg, cabbage, other shredded veggies, ginger, and spices. I've seen these compared to wontons, but I'd say that these are much more like gyoza or pot stickers, especially because of the delicious ginger. Mmmm. Ginger.

-little side dishes, or banchan. I will cheat for these delicious items, and look at Wikipedia's entry on banchan to try to get some of the spellings right. These delicious little sides included:

Helen advised us that she went to a Korean specialty grocery for these, so she didn't have to make EVERYTHING herself. These were all tasty and fun to eat, and complemented her fabulous homemade dishes wonderfully.

We had "Asian" pears (golden pears, apple-pears) for dessert, which were sweet and refreshing after all of the complex flavors of the meal.

I don't know how long Helen had to spend cooking, but the meal was absolutely fabulous - even once we were full, it was difficult to stop eating, because everything tasted so good. It was an especially great experience for the herbivores in our group, since many of the non-banchan dishes would ordinarily contain ground meat, and so we would have missed out on those fabulous dishes entirely.

Yaay, Helen! I've asked if I can interview her about her family's dinner experiences in her childhood, since she alluded to some family rivalries about certain dishes, and I'd love to hear more about that. I'll report when I have a chance to take her out and interview her, hopefully in May.